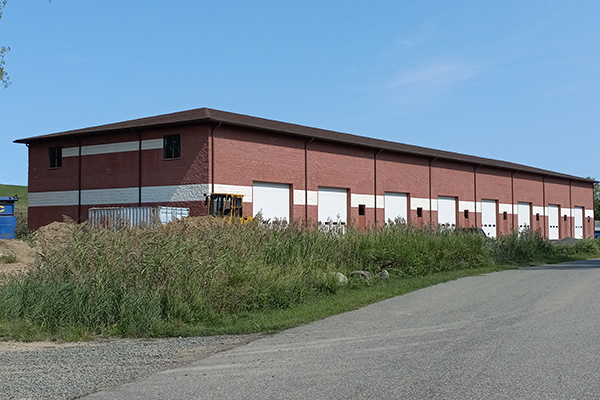 Warehouse Being Eyed Is On The Market For $4.2 Million; Massive Warehouse Project Proposed For Across Road On Ecology Lane

A large, newly built but unoccupied warehouse on Beach Road in the Town of Haverstraw could become the site of an animal shelter the five town supervisors are hoping to build to fulfill their obligations to house stray and abandoned dogs.

Rockland Green Chairman Howard Phillips, who is also the Town of Haverstraw supervisor, has said publicly a location for the future animal shelter has been selected but he has not named the site. By several accounts, Phillips, who is spearheading the effort to build a countywide (but not county-owned) shelter that is supported by the five towns, is referring to the privately-owned 15,000-square-foot building at 427 Beach Road.

The warehouse building on 3.69 acres sits just to the east of the Joint Regional Sewage Board, which is also helmed by Phillips, and to the south of the Haverstraw Aerodrome, a former landfill. The industrial site is also located less than a quarter mile from Rockland Green’s transfer station, and near the Cedar Pond Brook, a tributary of the Hudson River, which is prone to flooding. The area is in an “AE” flood zone, under FEMA (Federal Emergency Management Agency). AE zones are subject to 100-year floods, which have been occurring more frequently due to climate change.

Bruce Smith, who owns Environmental Construction Inc. in Stony Point, purchased the site on Beach Road for $678,000 in 2019. After building the warehouse, he listed the property for $4.2 million about six months ago, according to his broker at Keller Williams. The building is 60 feet by 250 feet with 25-foot ceilings and has eight ports. 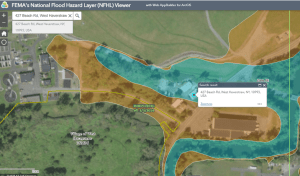 The brick-faced building, on the narrow Ecology Road, is directly across the road from a proposed 454,000 square-foot, 76-bay warehouse on a former construction debris landfill on 34 acres in the Village of West Haverstraw. The Grassy Point Bend project is before the Village’s Planning Board and will need to go before the Village Zoning Board of Appeals for height and parking variances. The project site requires an environmental cleanup. Village officials have raised a raft of concerns including truck and tractor trailer traffic, noise, and the impact to the narrow Ecology Lane, which is a couple of hundred feet from where the town supervisors are considering siting the animal shelter. The applicant is seeking 342 parking spaces.

The five town supervisors began scouting for a location to site a new shelter after the Rockland County Legislature in June tabled a vote on a spending plan that would have followed through with a years-long project slated to rebuild Hi-Tor. For more than a year, Phillips has undertaken an effort to bring Hi-Tor under the control of Rockland Green, the former County Solid Waste Management Authority. Along the way, the town’s supervisors began voicing concern over Hi-Tor’s ability to run a newly built shelter funded through donations, grants, and ultimately bonding through the county.

But rather than attempt to salvage the project at the Hi-Tor Animal Shelter in Pomona, Phillips and the town supervisors pivoted with a plan to find a new site for a countywide facility, that for now, according to Phillips, would be run by Hudson Valley Humane Society. Ultimately, the county plans to absent its role in a future shelter.

At this juncture, Hi-Tor, which has long suffered with inadequate facilities and has been perpetually underfunded, will be the shelter of record but it remains to be seen whether the non-profit will find a way to exist once the town supervisors move forward with a new shelter project.

Until now, no one has seen any plans or projections for siting or using a building on town or privately-owned land. Many behind the scenes say a contemplated site next door to Rockland Green’s facility in Torne Valley is no longer being considered. Officials say they are waiting to evaluate how the plan will impact taxpayers before they make any decisions.

By several accounts, the Beach Road warehouse property in Haverstraw is the frontrunner but it is unclear what entity – the coalition of towns or Rockland Green – would negotiate to purchase the warehouse or how a purchase would be funded by taxpayers. Municipalities must follow guidelines that prohibit them from purchasing a property for more than 10 percent above the appraised price of a building.

The Rockland County Legislature balked at spending $18 million for a new shelter, after the price tag rose by $10 million.

The Haverstraw warehouse sits amid several industrial activities. On a sunny day last week, the site was quiet though the wafting odors emanating from the Joint Regional Sewerage’s water treatment plant  were detectable. Some say the site would offer a future shelter outdoor space for dogs to be walked or trained.

However, it is unclear how the vicinity would be affected if a 450,000 square-foot warehouse with trailer truck traffic for a presumed distribution center would alter the levels of noise and traffic across the way at a potential future shelter.