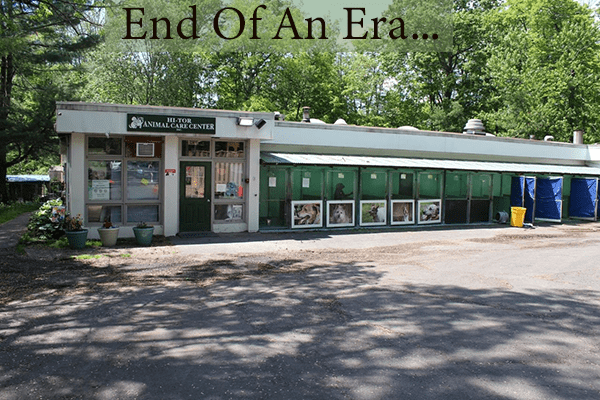 Ed Day Says Existing Facility Will Serve The Animals Until New Shelter Is Built; Hi-Tor Plans To Demand Repayment Of Monies It Raised For Hi-Tor Rebuild

Plans to build a bigger, better, state-of-the-art shelter for the animals that live a portion or the balance of their lives at Hi-Tor Animal Care Shelter in Pomona are dead once and for all.

However, Hi-Tor plans to demand to be reimbursed the $475,000 raised through donors for the Rebuild Hi-Tor project and transferred to the county’s coffers for the long-awaited project to build a 14,000 square-foot shelter that would have brought the county into the 21st century for shelter facilities.

In what became a tug-of-war for the future of Hi-Tor, the 50-year-old shelter known for its ups and downs as well as its endurance and commitment to maintaining a no-kill environment, the outcome seems clear. The five town supervisors have decided they no longer want to support Hi-Tor with an annual fee – although they recognize they need the shelter until another is built and ultimately run by the supervisors under the auspices of a subsidiary of Rockland Green, the former County Solid Waste Management Authority.

Over the course of more than a year, Rockland Green’s Chairman Howard Phillips, who is also Haverstraw Town Supervisor, orchestrated an effort to take over the shelter through the Public Authority. Phillips has been successful in building a coalition amongst the supervisors, who for many months have reiterated on radio shows and in other forums they no longer had faith in Hi-Tor’s management.

The rebuild took a significant pivot away from the Rebuild Hi-Tor plan after county legislators failed to fund the project, which has risen in costs from $8.3 million to $18 million. By some accounts, the sharp rise in costs were at issue but others have said that another underlying reason to pull the plug on capitalizing the project pointed to a strong desire amongst the town supervisors to take over the shelter duties. Town supervisors have an obligation to provide animal sheltering for dogs, though not cats.

What makes the navigation of this issue even more layered, and complex, is that Hi-Tor has always occupied a building on county-owned property. For many years, the towns paid Hi-Tor directly, and meagerly, to take their animals. Five years ago, an intermunicipal agreement between the County and the towns rearranged the order of things, requiring towns to up their payments to the county, and in turn, the county funded Hi-Tor. The increases in the fees were imperceptible to taxpayers, fractions of pennies on the dollar.

Which brings the issue to its essence: the Supervisors have collectively said they don’t plan to renew the intermunicipal agreement, which expires at the end of 2022. County Executive Ed Day said the shelter will not be left in limbo; there will be “something worked out” to make sure the animals are cared for, though no specifics were offered.

Hi-Tor, in the meantime is reeling. The indictment of its President Debbie DiBernardo has bruised the shelter’s reputation. Shelter board members have felt constrained to participate in the debate while they’ve been under a cloud. A steady drumbeat of criticism from the supervisors has further hurt the shelter, forcing donors to keep their hands in their pockets. Last month, the county issued an RFI (Request For Interest), inviting all those with an interest in the shelter to step up. Hi-Tor was the only organization that raised its hand to continue operating the shelter. The Humane Society of Hudson Valley threw its hat in the ring to run animal management but only once a new shelter is built.

Hi-Tor is at a crossroads. In the short-term, the nonprofit needs to continue to pay its employees, insurance, utilities, medical care, and food amid starkly rising costs. In the RFI, the county indicated it would continue to fund the shelter at an annual rate of $331,532, but that the shelter would have to rely on donations for the balance. In 2021, the contribution was $338,742, the most recent available data. There has been no adjustment for inflation over the years and no provision for additional payments based on state-mandated increases in minimum wage for shelter employees.

Hi-Tor is literally between a rock and a hard place. But so are four of the five supervisors. Two years ago, Teresa Kenny of the Town of Orangetown broke ranks with Hi-Tor and contracted with the Humane Society of Hudson Valley to take its dogs. It does not have an arrangement with the shelter for cats.

At least one Hi-Tor board member recently suggested the nonprofit close its doors on Dec. 31 and hand the keys to Phillips and the other supervisors. Hi-Tor is effectively being told that it is needed in the short term but no longer once a new shelter is built. And according to Phillips, the Hudson Valley Humane Society will step in to manage the day-to-day functions.

In the meantime, the town supervisors are scouting for a location for a new shelter. One potential site is on town-owned land in Ramapo’s Torne Valley on a largely inaccessible site in the northwestern corner of the county. Also in play is a town-owned building in Haverstraw that Phillips is recommending be retrofitted.

Day has said he’d hand over the architectural designs for the Hi-Tor rebuild, which has already cost taxpayers upwards of $500,000.

What remains completely unclear at this point is how the town supervisors plan on funding a new shelter. There had been much handwringing from the County Legislature over spending up to $18 million for a rebuild. However, if the town supervisors plan to provide a state-of-the-art shelter that gives animals room to roam and has the bells and whistles that had been promised, the price tag could be comparable and will simply be paid by the same Rockland County taxpayers, only from a different pocket. Additionally, Kenny, among others, have pointed out that it will likely be more expensive to run a shelter with Rockland Green employees compared to Hi-Tor volunteers.

In the meantime, if Hi-Tor goes silently into the night, it will mark the end of a long chapter. However, it the organization demands to be reimbursed the money it’s owed, it may have the freedom to chart a new course for itself without being tied down by the county or the town supervisors.