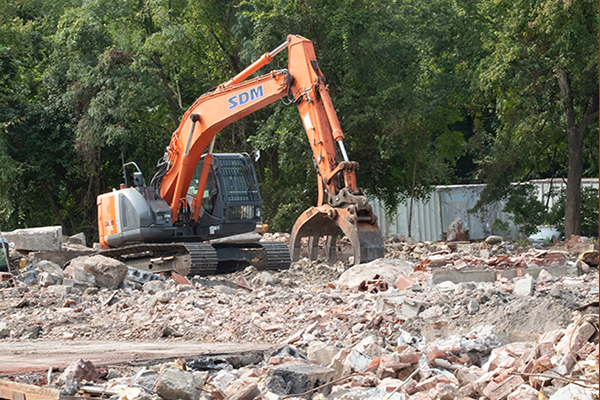 It took nearly ten years of public meetings, steering committees, workshops, scoping documents, and environmental impact statements to craft a Transit Oriented Development (“TOD”) around the Nanuet Train Station in the Town of Clarkstown. The idea was to encourage development of millennial and senior housing in smaller units close to the Nanuet downtown corridor and the commuter rail to Bergen County and New York City.

But it may be down to one property owner who won’t build on the several large tracts his family owns in the Nanuet TOD to move the Town to re-write the TOD to his advantage.

The proposed revisions to the TOD in the zoning code, introduced by Councilman Don Franchino, are sweeping and also encompass incorporating the Grace Baptist Church site into the plan. Plans are also underway to raze the church while the Town courts a developer to build senior housing.

But a key factor for the considered revisions points to the Cohen family, which owns at least five separate parcels up and down Prospect Street in two of the three TOD zones. The property owners have demolished the existing structures on their land but want to build with more density than the current zoning allows.

The developer is requesting that the town provide what it says is sufficient density to economically develop its parcels.

Clarkstown will hold a public hearing on the proposed changes on June 7.

The proposed draft came before the Clarkstown Planning Board last week on a referral from the Town Board, but the Planning Board deferred consideration of the proposed changes to a later date in May, that has yet to be set.

In June 2019, Clarkstown voted to rezone the heart of Nanuet’s business district into a cluster of dense residential housing and light commercial that is designed for walkability and train use. The 37-acre TOD, which is divided in three parts, caps housing units at 500. The original plan called for 750 housing units but was downsized to satisfy New York State Department of Transportation’s traffic concerns on state roads.

The goal of the Nanuet TOD, which situates housing close to transit, is to replace commercial and industrial uses with a vibrant “downtown” community surrounded by a single-family subdivision, Nanuet’s Main Street, and the Shops at Nanuet to the north. However, existing businesses in commercial buildings are grandfathered as pre-existing nonconforming uses for as long as they operate. A non-conforming use cannot alter its footprint without a variance.

The total number of permitted units throughout the TOD will remain at 500, even if the new local law is passed. But an update would change the configuration of how much development is permitted in each district.

The new Local Law, if adopted, would raise the permitted unit density and floor area ratio (FAR) in the business district (HC-N) along and adjacent to South Middletown Road. It would permit studio apartments, allow additional two-bedroom apartments, and much higher densities in the TOD-2 district.

The biggest change would allow what the town is calling “Transit Oriented Development Planned Unit Developments,” which was not part of the original study or review and would give developers with multiple properties within the TOD the chance to maximize permissible density on a smaller parcel. For example, the Cohens could utilize all the density on their five or more parcels in a smaller footprint.

The TOD-PUD also allows commercial development anywhere in the TOD as part of the TOD-PUD. The new TOD-PUD does place a time limit on approval. An approval is only valid if actual construction is commenced within two years of final site plan approval.

The Local Law also adds additional properties to both the TOD-1 and TOD-3 zoning districts, specifically bringing the shopping center between the train station and the Shops and Nanuet into TOD-3, and the corridor to the east of Middletown Road, including the Town-owned Grace Baptist Church site into the TOD-1 zone.