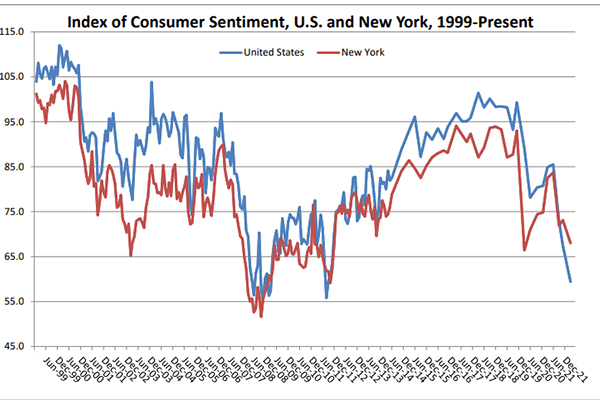 The New York State Index of Consumer Sentiment as of March stands at 68, down 5.1 points from the last measurement in the fourth quarter of 2021, according to the latest poll by the Siena College Research Institute (SCRI).

New York’s overall Index of Consumer Sentiment is 8.6 points above the nation’s Index of 59.4.

Both the current and future indexes fell about 5 points resulting in New York’s decline from 73.1 last quarter to 68.0 now. The national indexes all decreased between six and nine points.

National data compiled by the University of Michigan shows points above/below breakeven point at which sentiment is balanced.

The index has fallen to where it briefly stood when the coronavirus first slammed our economy. New York’s overall and future numbers are much higher than the national outlook owing to a partisan economic sentiment divide in which Democrats – a better than 2-1 advantage in New York – remain upbeat about the future while Republicans in this survey recorded the lowest consumer sentiment score ever recorded in a Siena survey. Gas prices and their impact is taking our collective breath away, hitting Republicans, Upstaters, and women the hardest. 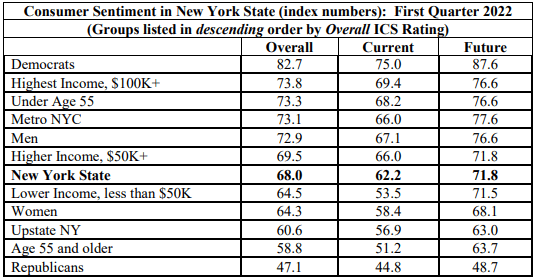