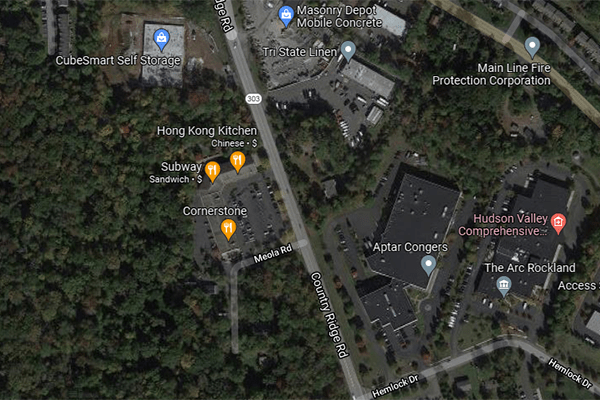 Self Storage Facilities Proliferating In The COVID Era; Companies Eye Rockland For Development

How much stuff do we have?

Developers angling to build self-storage units must think we have a fair amount.

Treetop Development, a Teaneck, New Jersey based real estate investment firm run by Adam Mermelstein and Azi Mandel, is proposing to build a self-storage facility on 6.4 acres of vacant land in Congers. The company, which appeared before the Town of Clarkstown’s Technical Advisory Committee (TAC) last week, plans to erect three buildings totaling 90,000 square feet and 30 parking spaces on roughly 16 percent of the parcel located at 287 North Route 303.

The property is made up of three parcels of land. Landowner Stanley Acker Ltd. Partnership sold the three parcels to 287 N. Route 303 LLC, a company affiliated with Treetop Development for $1.8 million in September 2020.

The applicant will need site approval, as well as variances for minimum off-street parking, steep slope disturbances, and building height. The plan calls for one three story building with 67,000 square feet, and two two-story structures that make up the balance of the 90,000 square feet of building.

Self-storage facilities, distribution warehouses, and senior living are among the hot trends in commercial development – and Clarkstown and the county is fertile territory for all the above.

More than 30,000 owners operate roughly 55,000 self-storage facilities nationwide, according to statistics from the Self Storage Association, a trade group. Five publicly traded real estate investment trusts with storage businesses — like Public Storage and CubeSmart — are typically located along highways and in industrial areas.

In 2020, Blackstone acquired Simply Self Storage — with eight million square feet of rentable space — for $1.2 billion, adding to the $300 million it had already invested in the sector. And in April, Public Storage closed its $1.8 billion acquisition of ezStorage, adding 48 properties with 4.2 million of net rentable square feet.

However, the self-storage industry is largely comprised of small business owners and real estate concerns.

Prior to the pandemic, the industry averaged 3.5 percent annual growth over the past three decades. After a decline in the first half of 2020, the demand for self-storage is on the rise as Americans clear out space in their homes to create home offices, and for urban exiles who have given up apartments and are in flux.

Keepers Self Storage on Route 59 was recently sold as part of a two-property portfolio in Nyack and Staten Island to GoStoreIt Self Storage, privately held, self-storage development, acquisition, property, and asset management company based in Charlotte, NC. The two facilities, comprising 112,957 rentable square feet in 1,433 units are part of GoStoreIt more than 63 self-storage locations.

The team that recently purchased the West Rock Indoor Sports & Entertainment Complex at 21 Pralle Lane in Nanuet appeared before the Clarkstown Planning Board last month for preliminary site approval to transform the property from a sports facility to a self-storage operation. The new owner wants to build a mezzanine level within the two large metal buildings – effectively adding a second level of around 70,000 square feet of usable space.