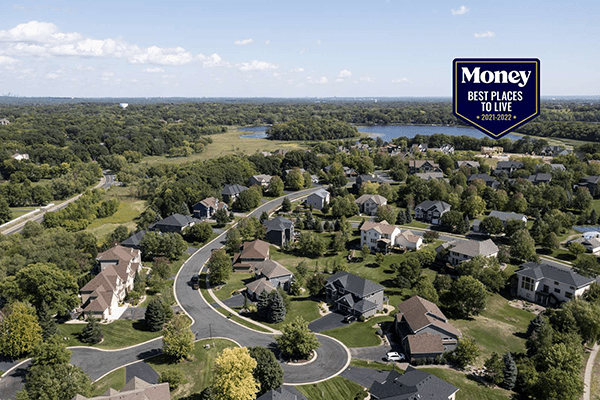 Town Ranks 49 Out Of 50 Towns; One Of Only Two New York Towns To Snag A Spot On List

In each round of rankings, Clarkstown is noted for its safety, parkland, trails and lakes, its proximity to the Hudson River and to New York City. In this year’s magazine blurb, Congers Lake Memorial Park, with its lake, playground, tennis and basketball courts and a dog park, is noted as the town’s crown jewel.

For 2021, Money Magazine noted that the “city” (Clarkstown is a town) also boasts two National Blue Ribbon-winning high schools and an “ever-growing list of celeb residents, including Bill Murray, Mick Jagger and Rosie O’Donnell.” Not sure any of these celebs live in Clarkstown – more likely Sneden’s Landing, South Nyack or Palisades in Orangetown.

The magazine also says the town, population 84,734, has “quite the business scene, with plentiful jobs in healthcare, pharmaceuticals and manufacturing, boasting four distribution centers and a whopping 100 delivery trucks.”

Job opportunities in Clarkstown are expected to climb 15 percent by 2025, the article says.

The magazine reports the town has an unemployment rate of 4.8 percent.

Clarkstown is only one of two New York towns to snag a spot on the annual list. Plainview, New York ranked 47 on the list. The Long Island town, with accessibility to Manhattan via the Long Island Railroad, has a median home price of $619,000 and a median income of $147,000. Job growth is expected to spike in this suburb by nearly 14 percent over the next five years.

“This range allowed us to surface places large enough to have amenities like grocery stores and a nearby hospital but kept the focus on somewhat lesser-known spots around the United States,” says Money Magazine.

To whittle down the 50 best, the magazine looked at nearly 100 different metrics (for a total of over 300,000 unique data points) organized into nine categories:

With an emphasis on affordability, the magazine put extra weight on cost of living, economic opportunity, and housing affordability. The list discarded towns with a crime risk that exceeds 1.5 times the national average, those where the median income level is lower than its state’s median, where population is declining, and towns that lack ethnic diversity.

The magazine limited winners to three per state and one per county.

Minnesota won the prize with the most towns – three, including the Number One ranking town, Chanhassen, which is home to Paisley Park, where Prince lived and worked. His studio is now a venue/museum dedicated to the late musician. The suburb, located 20 miles from Minneapolis, has a median home price of $458,184 but a mere population of over 26,000. Median household income is $125,401 and the unemployment rate is 3.6 percent.

The other four towns in the top five ranking are Carmel, Indiana, Franklin, Tennessee, Flower Mound, Texas, and Ashburn, Va. All are located within a major city and have populations ranging from 56,000 to nearly 100,000. Median household income in all five towns ranges from $115,000 to $133,041.

Paramus, the only New Jersey town, took the last spot on the list, ranking at 50. Though it is a powerhouse of retail, with major malls like the Garden State Plaza and Bergen Town Center, national retailers, and independent stores, it is also one of the smallest towns to make the list with a population of around 27,000. The median price is $620,517 and median household income is $133,660. The unemployment rate is 7.6 percent.