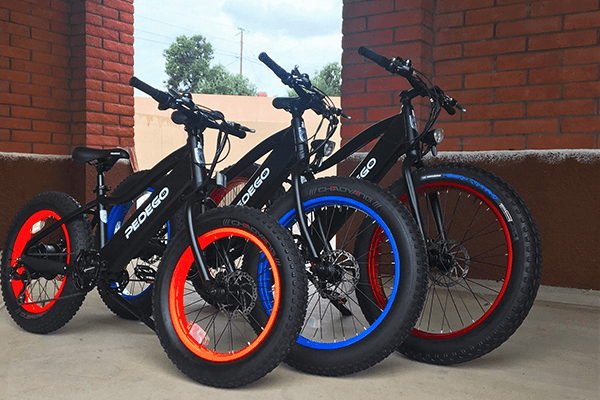 Simon Kaff is riding a wave of enthusiasm for electric bikes – a segment of the bike industry that has taken off during COVID. The former HVAC professional is opening a Pedego store on Franklin Avenue in Nyack – the first Pedego store in New York.

“Why not make a living doing something you love?” said Kaff, who has leased a 1,500-square-foot ground-level retail space at the Pavion rental complex in Nyack. The store is expected to open in November.

“I chose Nyack because it’s next to the new Gov. Cuomo bridge, near the Nyack Beach trail and close to other biking routes,” said Kaff, a Rockland resident.

Pedego Electric Bikes, which has more than 200 retail stores globally, says their locations have surpassed $121 million in retail sales over the last 12 months.

The stores are locally owned under license, not franchise, agreements. Kaff says he “owns” the Rockland territory in New York, and plans to open additional Pedego stores in the future.

Pedego reports over the past 10 years its sales have increased an average of 44 percent annually.

Between a pandemic-fueled bike boom and growing interest in electric transport options, demand for electric bicycles, or e-bikes, has been picking up speed.

“Let’s face it — everything electric is just hot, whether it be cars, now planes, trains,” Don DiCostanzo, CEO and founder of Pedego Electric Bikes, said on Yahoo Finance Live. “Electric bikes are probably the fastest-growing segment of any of these categories because they’re affordable for everybody.”

The electric bicycle category, like bicycles overall, saw sales increase during the pandemic as people sought outdoor, socially distant activities. Year-over-year bicycle sales in the U.S. ending April 2021 were up 57 percent, according to the research group NPD.

At the beginning of the pandemic, bicycle sales saw a stark increase as more people took to the outdoors for enjoyment amid strict lockdowns. Bike sales have since dropped 23 percent as of April 2021 compared to sales from last year, according to NPD.

Those tracking the industry attribute growth to e-bike because they are an ideal way for people to get outdoors and be able to climb hills or ride farther distances due to the electric motor and battery that assists cyclists with pedaling.

A 2018 National Institute for Transportation and Communities study found electric bikes appeal to a wider pool of riders than conventional bicycles, including older adults and those with physical limitations.

At a price point that is less expensive than most cars, electric bikes offer a more affordable way of getting around while also reducing carbon emissions. And by making tax credits available for electric vehicles, governments also want to make e-bikes cheaper.

A federal bill, called the E-BIKE Act, is making its way through the U.S. House of Representatives and would provide a rebate of 30 percent to consumers who purchase new electric bikes.