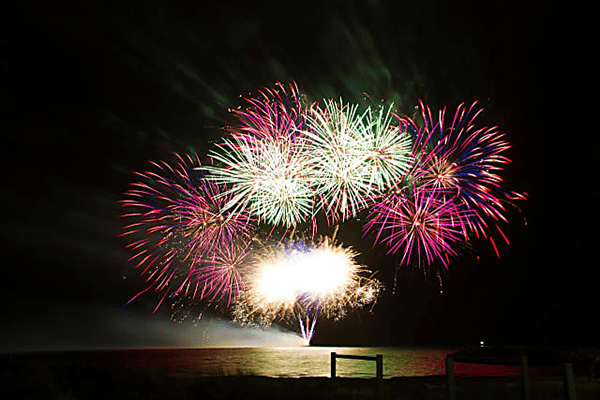 New York Boulders’ Saturday summer night games typically end in a crescendo of fireworks, combining the American tradition of baseball and night-time sky shows. The ten-minute climax to a night in the park adds memorable flavor to the experience.

But the fireworks are also a disturbance to the dogs, cats, and other critters living nearby at Hi Tor Animal Shelter in Pomona, according to Wayne Kleinman, a citizen who has gathered nearly 2,000 signatures from residents who are asking The Boulders to consider transitioning to “silent” fireworks to ease the lives of shelter animals.

“These animals are really suffering,” said Kleinman, who is circulating a Change.org petition via Facebook and on other social media groups. “We’ve heard that animals need to be sedated. The fireworks are really traumatic for them.”

Kleinman, a retired medical researcher who is new to activism, said, “Somebody needs to be a voice for these animals.”

The petition says the loud noise, at roughly 190 decibels, causes confusion, anxiety, fear, and blind panic. The petition points out that animals have a keener sense of hearing and that “they don’t know where the noise is coming from and feel they are under attack.”

It’s not only animals that suffer with the noise. For some veterans, or for victims of gun violence, the sudden booms and pops of loud exploding fireworks can trigger a PTSD episode, recalling the “duck and cover” response to unpredictable danger. Children can also suffer. Some children on the autism spectrum can be overwhelmed by the huge noises and the unpredictable sounds of fireworks displays, and their parents are often advised by psychologists to buy noise-canceling headphones for such events.

Hi Tor and The Palisades Credit Union Park, home of the NY Boulders baseball, are situated less than one mile apart.

The petitioner concedes people love fireworks, but they traumatize pets and shelter animals and is asking the Boulders to consider “silent” displays.

Shawn Reilly, Team President of The Boulders, said The Boulders have taken steps to mitigate ambient noise outside the ballpark.

“We have reduced the number of shows every season,  reduced the length of the shows, removed the percussion shells,” said Reilly. ” And we will continue to explore ways to reduce it even further.”

However Reilly says fireworks are an integral part of drawing crowds to the games, and the team’s success benefits Hi Tor because the two organizations partner to adopt animals.

“More than 40 animals have found new homes as result of this partnership,” Reilly said. “The irony is Hi-Tor likes the Saturday games as they are the largest crowds because of the fireworks and that increases their exposure and the odds of a fan walking home with a new family pet. Thus the 40+ adoptions should be the ultimate goal for every Hi-Tor supporter.”

Hi Tor President Debbie DiBernardo agrees the shelter’s relationship with The Boulders helps promote adoptions but says fireworks are difficult for shelter animals. “I’m hoping silent fireworks might be something the baseball team will consider. That would be a win-win.”

The Park prohibits dogs at baseball games that include fireworks.

Several cities have started to use “silent fireworks” in order to make shows more enjoyable for children, pets, and people with PTSD.

“Silent” fireworks can deliver the same cascading colors but without the daunting decibels and startling explosions that usually erupt in the night sky. While silent fireworks are visually stunning, they lack the big explosive power that drives mega-displays high into the air for viewing by thousands. They are ideal for smaller events. The trade-off in scale is a welcome one for those who experience trauma, fear, and even lingering effects of hearing loss.

Quiet fireworks are not new. They are used routinely in classic firework shows as visual effects to accompany the loud bangs. For example, the “comet tail,” which shoots into the sky with a trail of sparkles before quietly fizzling out or the “flying fish,” which features tiny tadpole embers scattering away from a silent burst – both are silent. Advocates for silent fireworks point out that they can be more colorful. The colors in a firework are packed in pellets called “stars.” When certain chemical compounds are heated, they emit signature colors to get rid of their excess energy. For instance, barium compounds emit green, red comes from strontium and blues are made with copper.

Despite the name, these more colorful fireworks aren’t entirely silent, but they are significantly quieter, registering at far below the typical 150-170 decibels of the loud fireworks.

Kleinman said he will continue to collect signatures and continue fighting for relief.

“I just want to educate people because animal suffering breaks my heart.”