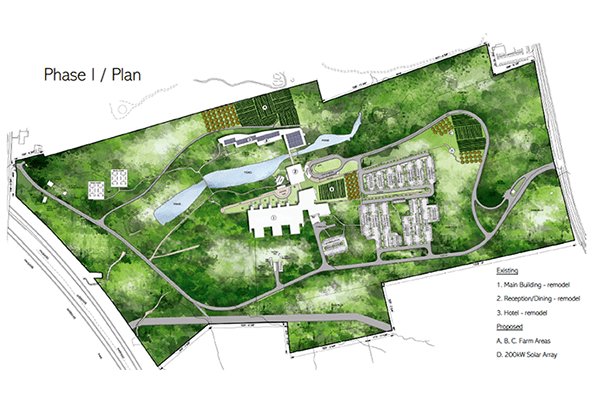 A hipster-inspired plan took the prize to redevelop a coveted parcel in Orangetown.

The Town of Orangetown has chosen Kitching/Pelayo as the “preferred developer” to redevelop the HNA Palisades Center at 334 Route 9W. However, HNA, a private property owner, has the power to decide whether a purchase offer is acceptable.

A source close to the dealings said Kitching/Pelayo plan to offer nearly $40 million for the property.

“This was not an easy decision – but it’s the right decision for the community,” said Town Supervisor Teresa Kenny.

The board voted 4-0 to move forward with Kitching/Pelayo, eliminating the two other finalists in a public process that involved presentations, feedback, and meetings with neighbors over the past 10 months.

Teaming up for what we’ll call a “Brooklyn Comes to Rockland Plan,” the winner’s plan envisions an updated hotel/conference center, world-class spa, a restaurant with biodynamic gardens, spaces for makers, 50,000-square feet of photo and film studios, test kitchens and co-working.

Phase Two of the plan also calls for 20-30 townhomes to create “bigger accommodations for families and longer-term stays.”

Mark Kitching is director of the Estates Division at Douglas Elliman based in Beverly Hills, California. Jerome Pelayo is an architect with Sunia Homes, and real estate developer in Malibu, California.

“This was not an easy decision – but it’s the right decision for the community,” said Town Supervisor Teresa Kenny.

The town rejected proposals from CookFox Architects, who envisioned a plan led by production studios, and Procida Associates and a team of home builders who planned to revive the hotel and build townhouses.

“When people come to me for financing, the first thing I ask for two years of tax returns and financial statements,” said Procida. “I hope Orangetown asked for that.”

Town board member Tom Diviny said he was going to abstain from voting because he did not favor a hotel. All three plans included renovating the hotel.

The town’s resolution states that it will “work with Kitching/Pelayo to assist them in acquiring the property, entering into a development agreement, as well as cooperate to the extent legally permissible in expeditiously considering the necessary zoning changes and other approvals” to facilitate redevelopment.

“Nothing is final,” said town board member Paul Valentine. “HNA can sell it or keep it.”

HNA is free to market its parcel independently and retains control over whether it accepts an offer. However, the town’s resolution includes language that indicates the town will consider taking the property through eminent domain.

The resolution states the town realizes HNA may not be willing to voluntarily cooperate in the acquisition of the property and may therefore consider “exercising its governmental authority” to use eminent domain.

The Palisades hotel and conference center was purchased by HNA Training Center NY LLC for $60 million in 2016 from IBM.

The hotel/conference center was put up for sale more than two years ago. A deal to purchase the hotel fell through after the prospective buyer failed to finance the purchase. In late 2019, ZVG@Palisades LLC, an entity affiliated with Vasco Ventures, tried to buy the property. The deal ultimately fell apart because the buyer did not have the roughly $40 million purchase price at the original closing deadline on July 10, 2019. The entity left an $8 million deposit on the table.

Shortly after the deal fell through, Orangetown officials stepped up to insert themselves in the fate of the property, citing concerns that a new buyer might take the 106-acre property at 334 Route 9W off the market if it used by a nonprofit.

Calling their plan “a haven for a generation of thinkers, creators, engineers and artists,” the chosen developers said, “We are looking to take a measured approach,” said Architect Jerome Pelayo of Sunia Homes. “We don’t want to destroy it. We don’t want to bring more traffic.” The plan also includes between 20 to 30 townhomes in the project’s first phase, and another similar amount for a second phase.

Explaining its plan will include textile and technology workshops, catering kitchens, and business incubators, the team called the concept a place “to learn, teach and communicate.” The group emphasizes an environmentally-driven project utilizing solar arrays, water reclamation, and biodynamic farming.