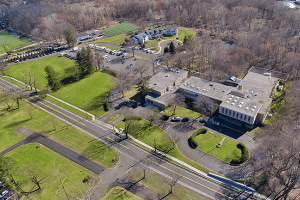 The Venture Center, formerly the Rosary Academy High School for Girls, is home to the Venture Center Day Habilitation Programs, which offers programs and family-like care for people of all ages with intellectual and other developmental disabilities. Camp Venture services all five towns in Rockland County, and has provided assistance to more than 2,000 youth and adults since its inception.

As part of the sale agreement, Camp Venture will continue its operations on site, for up to seven years, under a lease with STAC.  According to Camp Venture’s CEO, Matthew Shelley, “We appreciate the opportunity to continue to utilize this space and build upon our long friendship with STAC.  Camp Venture plans to maintain our day programs, staffing and other operations at the site, during the multi-year period, leasing all necessary space from STAC.  During this leasing period, we will evaluate other sites across Rockland County to which we can relocate our beloved programs into more modern space, and become better integrated in the community”.

STAC will ultimately use the site to expand services for the growing need of this four-year college located on lands adjacent to and across the street from the Venture Center.

Paul Adler of Rand Commercial was the broker on both sides of the deal.

The Sloatsburg Gateway Park project, which received a $249,000 grant under the United States Department of Agriculture’s (USDA) Rural Business Development Grant Program, has broken ground. The federal funding will be used to rehabilitate a vacant parking lot into a modern-rustic plaza at the doorstep of the Sloatsburg Train Station.

The park is designed to stimulate business along the Main Street/Route 17 corridor and help to propel the village’s ongoing revitalization efforts. 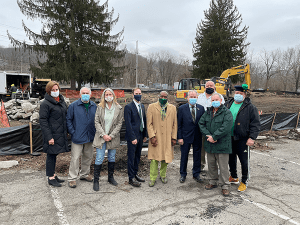 “Working together and finding innovative ways to move forward on projects like Gateway Park and our concurrent NYS DOT Complete Streets Program, which is progressing, will benefit small businesses, increase local investment and create jobs in the county,” said Sloatsburg Mayor Peter Akey.  “It is a credit to everyone’s hard work that we have reached this juncture on an initiative valued at almost $400,000. We are looking forward to working with Precise Enterprises II of Wallkill, NY which was awarded the contract bid, and Related Companies which provided a financial match, to help us reach the finish line on an impactful project for the village, county and region.”

The USDA Rural Business Development Grant is designed to fund projects that benefit small and emerging businesses in rural areas. The Sloatsburg Gateway Park project will be an integral component of the village’s transit-oriented development (TOD) redevelopment plans and will complement the Valley Rock Inn project in fashioning a one-of-a-kind tourist and corporate destination. The plan calls for the development of a vacant parking lot adjacent to the Village’s Metro North/NJ Transit Train Station and will turn it into a passive park, increasing public parking significantly, and creating pathways and interpretive signage that will direct visitors to Sloatsburg’s businesses.

The park will include decorative lighting, landscaping and amenities for residents, visitors, and tourists.  The Sloatsburg Train Station is located on Mill Street immediately opposite of the property and readies availability of commuter parking which will encourage the use of public transportation and invite visitors to the village’s downtown business district. A ribbon cutting is planned for early summer. 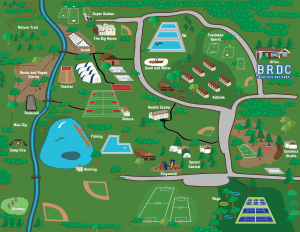 Blue Rill Day Camp, according to its previous website, had been a camp since 1951, with three heated pools, a fishing/boating pond, multiple art rooms, a full adventure course with a rock wall and zip lines, a go kart track, an archery range, a theatre, a ceramics studio, two cooking rooms, along with multiple tennis/basketball courts, baseball/soccer fields, and other facilities. The camp was owned by Greg Schreiner and last served campers in 2019.