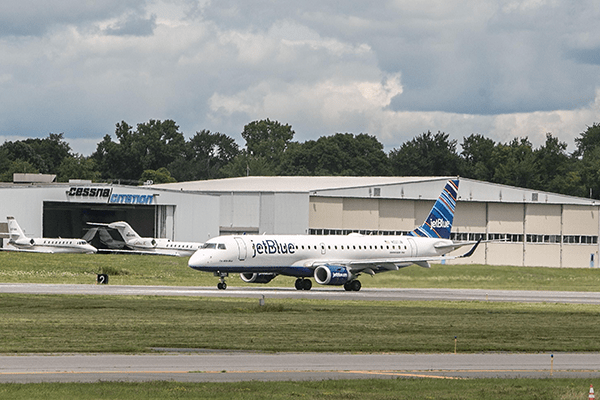 JetBlue Airways and Delta have suspended operations at New York Stewart International Airport indefinitely as the coronavirus has tamped down the desire to travel and airline revenue has plummeted.

JetBlue Airways, Stewart’s most popular airline, had suspended flights in April to reduce costs but says it has still not determined a reopening date. It has suspended services at seven airports. The airline is planning to resume flights to five of the seven airports, with service to Stewart and Worcester Regional Airport in Massachusetts placed on an indefinite suspension.

The move came after the part of the agreement under the government stimulus package expired on Sept. 30. JetBlue Airways received under $1 billion in grants and Delta received $5.4 billion. Under the conditions of the grant program, they were required to keep employees on the payroll through the end of September.

A new bill, the Heroes Act, that carries a similar provision is being considered by the White House and House representatives. It would extend the payroll support program through March 31 and provide $13.5 billion for airports that aim to assist restaurants and retailers located at the airports.

Airlines have felt the pain of the coronavirus pandemic more than nearly any other industry. In a heartbeat in March, business stopped, with people unwilling to fly. Airlines were hopeful that COVID-19 would fade in the summer and that travelers would once again feel comfortable flying.

But eight months into the pandemic, with some cities or regions reentering lockdown and a potential vaccine still months away, the likelihood of a quick comeback is not up in the air. International air traffic in July was 92 percent below 2019 levels, and there was little sign of improvement in August, according to the International Air Transport Association (IATA). More than 400,000 airline jobs have been cut since February, according to data compiled by Bloomberg.

“This is lasting longer and is deeper than most people thought,” says Scott Kirby, chief executive officer of United Airlines Holdings Inc. “And our view is demand is not coming back. People are not going to get back and travel like they did before until there’s a vaccine that’s been widely distributed.”

In August, American Airlines, which is still operating, announced a one-month halt to its Stewart flights during through Nov. 7. The airline has not determined when or if flights will resume.

A spokesperson at The Port Authority of New York and New Jersey that operates five airports including Stewart International Airport said although people are starting to come back, the volume of passengers is down 78 percent compared to the same period in 2019.

Many airlines in the spring ceased flights as parts of the country went into lockdown and the virus was spreading. In the spring, demand hit an all-time low volume at 98 percent. Some airlines have resumed service after a period of suspension.

A spokesperson at The Port Authority of New York and New Jersey that operates five airports including Stewart International Airport said although people are starting to come back, the volume of passengers is still down 78 percent compared to the same period in 2019.