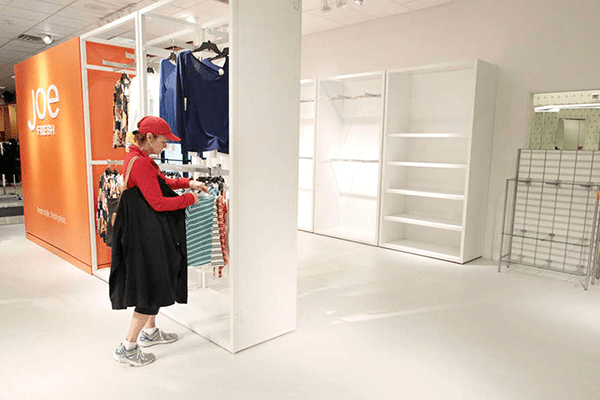 Malls around the nation closed since March to prevent the spread of COVID-19 began opening within the last two weeks, but foot traffic remained anemic, according to data from Placer.ai.

Rockland’s major malls – The Palisades Center and The Shops at Nanuet – have not put the lights on yet because the county has not yet met the metrics that are needed for Gov. Cuomo’s phased-in reopening plan.

Mall traffic was down 79.2 percent on average at eight malls in reopened states compared to the same period in 2019, according to Placer data through May 11. The best performing of the group was Haywood Mall in South Carolina, owned by Simon Property Group, which saw a 63 percent decrease relative to last year.

SPG, owner of The Shops at Nanuet, opened 49 malls in ten states in the first few days of May, while another mall giant, Macerich, reopened 20 shopping centers as of May 19, with plans to reopen 35 more by the end of May.

The Placer.ai data showed that the number of shoppers increased as the month progressed at a growth rate of 2.4 percent, indicating that the recovery is slowly gathering momentum. Data shows visit durations have been shorter than average and the distance from which shoppers traveled was shorter too.

Reopened malls did so cautiously with limited hours. Not every store in each mall opened its doors and many restaurants and movie theaters remain shuttered. SPG has said they would keep their malls open with limited hours to allow for overnight cleaning.

Emergency measures to slow the spread of the disease forced retailers to temporarily close their stores in March and sales fell a record 16.4 percent between April and March

Accounting for 5 percent of the American economy, retail has been on a decade-long decline. Since 2010, due in part to the rise in online shopping and growth of club-style big-box stores, dozens of retailers have declared bankruptcy, shutting tens-of-thousands of brick-and-mortar stores.

Pier 1 Imports Will Shutter All Its Stores, Including Rockland’s Spring Valley Location

Prior to the COVID-19 pandemic, Rockland County has seen the seismic shift with the disappearance of Sears, Macy’s, JC Penney, Lord & Taylor and countless big box stores. This week home-décor retailer Pier 1 Imports announced its plans to go out of business and permanently shutter its 540 stores, including Spring Valley. The Texas-based retailer has been seeking a buyer after declaring bankruptcy in February but those plans were uprooted by the coronavirus pandemic.

“This decision follows months of working to identify a buyer who would continue to operate our business going forward,” Robert Riesbeck, Pier 1’s CEO and CFO, said in a statement. “Unfortunately, the challenging retail environment has been significantly compounded by the profound impact of COVID-19, hindering our ability to secure such a buyer and requiring us to wind down.”

Pier 1 filed a motion in bankruptcy court for approvals of a “wind-down” of its operations as soon as its stores are able to reopen. It plans to sell its inventory along with its remaining assets, including its intellectual property and e-commerce business, the company said.

While retailers have been battling to remain relevant for some time, the coronavirus pandemic has poured fuel on the fire. Malls, once home to so much retail that they couldn’t be put up fast enough, have either become blights or have been gaming strategies to remain relevant, including a shift toward entertainment. Analysts are now forecasting one in four malls will be closed by 2022.

J.Crew, Neiman Marcus and JC Penney are among the storied chains that have already filed for bankruptcy and several others are reportedly close to doing the same. The weakness was there but the pandemic has accelerated the demise of the most vulnerable retailers, forcing nearly 200,000 to close. Many have publicly decided not to pay rent for now.

With retail tenants not paying rent, “a large number” of commercial landlords have already missed mortgage payments, according to the commercial real estate analyst firm Trepp.

The Pyramid Management Group missed its most recent mortgage payment on a $388.5-million loan for the Palisades Center. The loan was then transferred to a special servicer due to “imminent monetary default. In the commercial mortgage-backed securities (CMBS) industry, a special servicer assumes responsibility of a loan from its original administrator, known as a master servicer, when the borrower has “defaulted mortgage loans or loans that are designated as ‘specially serviced’ as a result of credit events.

The Palisades-affiliated CMBS loan was just one of six Pyramid loans to have been moved to special servicing.

With its e-commerce sales exploding, growing by 74 percent in Q1, Walmart announced it would discontinue its Jet.com unit. As Walmart’s sales increased, so did its costs as Walmart took measures to make stores safer from the spread of the new coronavirus, and compensate employees for their risk. The retailer paid $755 million in special cash bonuses to all hourly associates and accelerated payment of $170 million in a regular bonus program.

The company hired more than 235,000 new associates during the quarter as it tried to meet “unprecedented” demand. It added nearly $11 billion in revenue to its quarterly sales, posting $134.6 billion for Q1, an 8.6 percent year-over-year increase to its top line. The retailer also officially nixed Jet.com, once a centerpiece of the company’s e-commerce strategy.

The company says its decision to kill Jet.com is part of a strategy to cut costs and find efficiencies as it boosted spending to manage pandemic shopping.