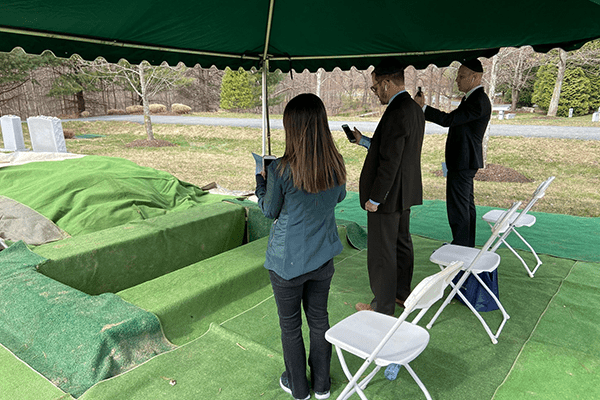 To date, there have been 334 coronavirus-related deaths in Rockland County. Ironically, Rockland Florist, a Congers small business that caters mostly to funerals, has been knocked to its knees by the coronavirus pandemic.

Rockland Florist, renowned locally for its spectacular floral creations sought after for funerals, has seen business fall off by nearly 80% over the past six weeks. Typically, nearly 90% of their arrangements and casket sprays are geared to funerals in Rockland and Bergen counties. Perry Dimataris, a 40-year florist, has turned funeral arrangements into an art form with his three-dimensional representations of symbols and themes that are meaningful to the families who are saying goodbye to loved ones.

Over the past six weeks, family-owned funeral halls have taken social-distancing precautions, which has reduced the rituals to groups of less than 10 gathering at their facilities, seated six feet apart. The corporate funeral homes have suspended gatherings at their homes all together. Meanwhile, gravesite burials have turned into drive-by visits to keep people safe.

The need for funeral flowers has been largely reduced to casket sprays, said Terry Dimataris. “There’s no demand for arrangements at funeral halls.”

Dimataris says these limitations are as hard on grieving families as they are on the florist.

“I got a call from a woman who recently lost her mother,” said Dimataris. “She was devastated over the fact that the funeral halls are not allowing flowers. She said when things go back to normal, she will come back and order gravesite flowers.”

The Dimataris’s do not know whether Rockland Florist will survive the plague that has ripped away the normal course of daily life. Death, as they say, is a certainty. The Dimataris’s have weathered recessions. But this pandemic has turned routine and ritual upside down.

The shop has been able to stay open during the lockdown because it is deemed an essential business. However, with plunging sales, Terry says the business is two months behind in rent, late on taxes, and has laid off a valuable worker who had become Perry’s protégé.

The Dimataris’s have applied for Small Business Administration emergency loans. They’ve heard nothing so far.

“Perry is not paying himself,” his wife said. “Right now anything that’s coming in is being used to pay down the wholesalers. I’m not sure how long we can go on like this.”

Throughout our interview, Terry circles back to Perry’s artistry. He has replicated slot machines and flags with elaborate and complex floral arrangements.

“It’s what I’ve done my whole life,” says Perry, whose father, and grandfather were both florists. The Dimataris’s opened Rockland Florist a decade ago and have built a community-minded business that has never had to advertise because of word-of-mouth referrals.

To add insult to injury, the wholesale flower markets have been wiped out by the scourge. Typically Perry visits the markets daily. Over the past six weeks, the warehouses have become ghost towns with bare shelves. With the supply chain choked off, Perry turned to his own garden. During late March and April he plucked magnolias, forsythia, tulips and daffodils from his property to create arrangements. It’s hard to keep an artist down. But as his wife points out, those flowers will not be available in a couple of weeks.

“A month ago we talked about closing our doors,” said Terry. “We were not able to get flowers at the market but the flowers starting growing and blooming and Perry got creative.”

It is unclear whether New York will truly be ready to reopen in mid-May and it is entirely unclear when gathering in large groups again will be safe. The total number of coronavirus cases in Rockland County is 9,171 as of Monday afternoon, with more than 21,400 people being tested. There are currently 245 hospitalized COVID-19 patients, and 193 patients under investigation at county hospitals.

The next challenge for the couple is Mother’s Day, May 10th.  With the wholesale markets starting to fill up again, the couple is less worried about supply. However, Terry said wholesale prices have shot up by 20%.

“We’re going to make every effort to pull it off and we will not raise our prices,” said Terry, adding that Mother’s Day and Valentine’s Day make up roughly 10% of total revenues. “We will take call-ins and we’ll make deliveries. Our kids will come and help out. If we have walk-ins, we’ll make sure everyone is safe. We will do what we can to put joy and comfort into people’s lives. That’s what Perry has always done.”