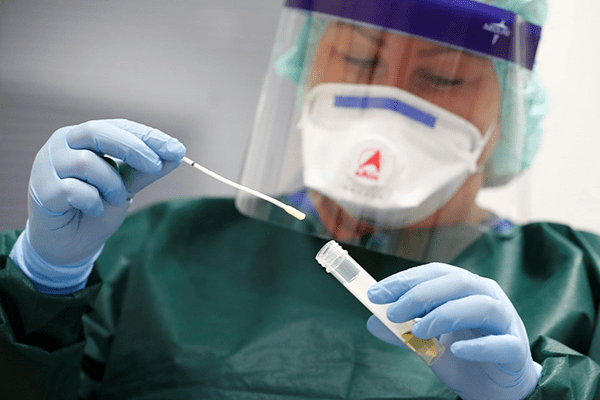 The Uphill Battle For Patients And Doctors During a Pandemic

A Rockland woman has told RCBJ how she got a coronavirus test. Wanting to remain anonymous, we’re going to call her “Gloria”.

Gloria is nearly 62 years old.  Her family has a history of heart disease. She’s been struggling medically with undiagnosed pain and bone deterioration for the past year. She’s landed at the hospital on a handful of occasions and more recently was given a prescription for medical marijuana for pain management. She is a smoker.

Gloria, who works in sales, also is a support system for child and her child’s child.

Over the last week, she’s been experiencing a dry cough, headache and chest congestion. She hasn’t had a fever but she’s been feeling fatigued and ill. She’s also scared because she has no one to depend on, and others who depend on her. Late last week, she learned about a coronavirus testing center at Anthony Wayne in Stony Point but heard that you need a referral to go there and that the waiting time on the health-line exceeds 70 minutes. She tried calling the health-line but no one picked up. Then her primary care doctor told her to go the urgent care facility. Gloria said the doctor’s office said “we’re not seeing patients.”

Like Gloria, Rockland County residents who are feeling unwell have no idea how the healthcare system works at this unprecedented time of navigating a pandemic. Public officials are urging citizens to stay home, quarantine themselves. Hospitals and urgent care centers remain open but it’s not business as usual. People are largely being told that they will not be given a test for coronavirus unless they’ve been exposed to someone who’s tested positive. Having a fever is a key factor in being given a test.

Gloria called CityMd in Nanuet early Friday morning. She said her primary care doctor has told her to call, explaining she was feeling progressively worse over the last few days. CityMed told her to come in. Gloria was surprised to find only two patients in the waiting room. She was seen right away by a doctor wearing gloves and standard surgical mask. She tested negative for the flu. But she told the urgent care doctor she wanted the test.

The doctor told her “we can’t give you the test.” She told Gloria each doctor at the care center can administer three tests per day. Gloria did not have a fever and at the time she hadn’t know she had been exposed to someone who had contact with someone who had tested positive to COVID-19. That revelation would come later.

Meanwhile, at the urgent care center, Gloria continued to beg for a test. “Please don’t let me leave here without a test. Please.” Gloria said tears began to spill. She said she felt desperate and alone and hoped she could appeal to the doctor’s humanity. This doctor was obviously in a tough spot, as Gloria did not perfectly fit into the profile for someone who might be infected, and because the United States’ medical system is woefully ill-prepared to deal with the coronavirus pandemic.

Still, Gloria begged. She said the doctor looked at the nurse. The nurse looked back at the doctor. And then, she poked a finger at Gloria and said, “I will give you the test. Don’t you dare tell anyone you got a test here.”

Gloria is waiting on the test results. She said she’d been told the New York Health Department will contact her in a week if she tests positive. There will be no call if the test comes back negative.

Late that same day, Gloria learned her grandchild’s nursery had sent a letter to nursery school parents saying one of its employees had tested positive for the coronavirus.

Gloria now waits for the results – or to not hear the results. She’s at home in quarantine.

There are scores of Glorias out there who are struggling with fear, frustration, anger, sadness. Americans are not accustomed to this level of chaos, let alone shortages of medical supplies. There are CDC recommendations but doctors are using their discretion. Gloria’s story reveals the Darwinian nature of this crisis. Who will fight hard enough? Who can figure out how to get through to the health-line? Who will work their networks for favors? It is a Lord of the Flies moment.

“When that doctor said ‘don’t you dare tell anyone you got the test here,’ my head exploded. So this is how it is. This is what the world has come to. It’s horrifying.”

“Did I take a test away from someone who needs it? Am I killing someone else. I’m sad about this. It’s hurting my heart.”

RCBJ corroborated Gloria’s experience at CityMd via her medical paperwork.