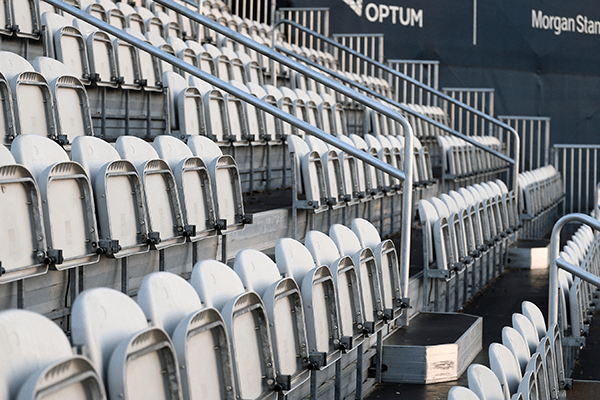 The teenager who loses her minimum-wage job at the mall. The residential realtor who cancels the Sunday open house. The artist whose commissions disappear. Empty restaurants, email inboxes, daytime schedules.

How many seemingly short-lived interruptions have we already felt due to impact of a virulent virus that has no cure, no vaccine, and no known trajectory?

In the past two weeks, the nation has experienced economic convulsions, from cancellations of concerts and sporting events to shutdowns of restaurants, theaters, museums. Rightly so, we are distancing ourselves from crowds, staying home, avoiding a normal range of leisure activities that keep the economy pulsing.

Today, the governors of New York, New Jersey and Connecticut have announced a series of steps to stem the virus including limiting bars and restaurants to takeout and delivery, as well as closing casinos, gyms and movie theaters.

Nobody would argue the most important thing right now is to stem the spread of the virus, and that no measure seems too extreme. Not shutting schools or nursing homes or catering facilities.

The coronavirus is wreaking havoc worldwide, with Italy reporting 368 new deaths, bringing the toll there to 1,809 on Sunday, the largest one-day rise for any nation, and many say, a harbinger of what could happen here in the U.S. if the government does not act decisively.

Today, County Executive Ed Day issued a Declaration of a State of Emergency in Rockland.

“This is a rapidly changing situation, but we have been working through the weekend to ensure everything is being done in a legal and proper manner,” Day said in a statement Sunday. “We have been in close contact with our school Superintendents, Rockland BOCES and other local officials as we finalize the plans that will protect our children, our families and our neighbors. I once again ask our residents to stay calm and remember to look out for your friends and neighbors as we navigate this situation with COVID-19.”

The second virus-related fatality in New York occurred in Rockland, where a 64-year-old who had died in Suffern was tested posthumously and found to have been infected. He had underlying medical conditions, according to the Medical Examiner.

In the U.S., more than 3,100 cases of the virus have been reported across 49 states as of Sunday, and public officials are using their power to enact stricter measures to slow the virus’s spread. New York City’s public school system, the nation’s largest with 1.1 million students, will be shutting down this week. Ohio ordered restaurants and bars to close. Maryland has shut down casinos, racetracks, and betting facilities. Starbucks plans to close some stores in malls and cities with outbreaks.

Dr. Anthony Fauci, the director of the National Institute of Allergy and Infectious Diseases has said that a 14-day national shutdown might eventually be needed and he urged people to “hunker down significantly more than we as a country are doing.”

Most can agree that we’ve never experienced anything like this before. There’s no playbook – as there has been after a hurricane or even in the wake of 9/11 or even a post-war period. The irony of most colossal disasters is that after the initial impact of the event it is human nature to regroup, come together, to unify both psychologically and physically to heal wounds and find ways to move forward. The COVID-19 virus by its nature forces us to physically isolate ourselves, to fight for our individual survival. Understandably, we are literally afraid of one another.

Many entrepreneurs already feel the impact of this crisis – though it has been going on for just a few weeks. As fear deepens, and as public officials take more understandable draconian measures, the streets, the stores, the restaurants, the movies – you name it – will become ghost towns.

The questions are: Who can weather the storm? What business has deep enough pockets? Will it make more sense to take a loan or fold?

The Federal Reserve on Sunday night slashed interest rates to near zero and unveiled a sweeping set of programs in an effort to stem the bleeding economy. In addition to cutting its benchmark interest rate by a full percentage point, returning it to a range of 0 to 0.25 percent, the Fed said it would inject capital into the economy by buying at least $500 billion of Treasury securities and at least $200 billion of mortgage-backed debt over coming months.

This is a start, as is the ramp up of testing. And while the Fed’s moves will make it cheaper for consumers to borrow and spend as the nation bounces back from the virus, what nobody knows is how long that will take, and what the cost in human life and businesses will be.