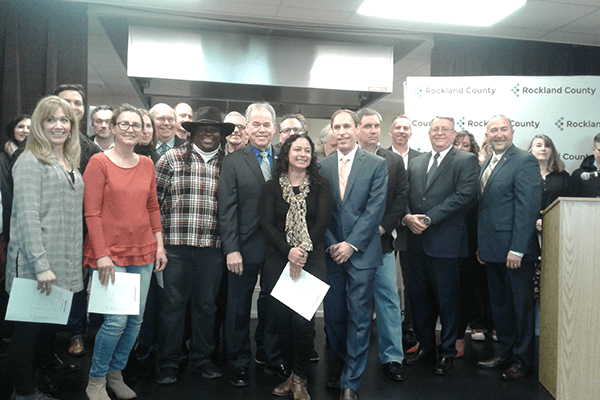 Visit Nyack, the nonprofit that drives tourism to Nyack and the county, once again took the big prize during the county’s announcement of annual tourism grants. Awarded $50,000, the nonprofit towered over other recipients who collectively received the $212,000 for 32 projects.

The tourism grants derive from the county coffers, which is a dedicated tourism line in the budget. The county also gets funding from I Love New York, an affiliate of New York’s Empire State Development for promoting Rockland County. This year’s allocation is $60,043, a matching-fund grant.

For several years, Visit Nyack has lead an advertising campaign that has brought tourists from the metro area and surrounding counties.

The culinary center, another source of pride for Nyack, and the county, is not just the county’s “CIA (Culinary Institute of America),” where students learn culinary arts and sciences. It is also a venue to host culinary competitions and other events in a refurbished theater.

Asked why Visit Nyack won nearly 25% of the funding, Schuman said, Nyack has tremendous infrastructure to market the county. It’s a gateway to the county. It has helped brand the river towns.

“We’re happy to be collaborating with the county to bring tourism,” said Visit Nyack’s director Meg Mayo, adding the grant money will be used to fund Visit Nyack-themed posters on the MetroNorth, and for digital advertising in publications including The New York Times, Time Out New York, New York Magazine, and others.

Ed Day, who attended the event, noted six years ago, when the county was strapped, there was no ability to hand out grants. Today he pointed out the average household in Rockland would have to pay an additional $568 in yearly property taxes to maintain current services if not for tourism generated sales and local taxes, Day, who ticked up the total grant money this year by $1,000, also said 7.1% of the county’s employment, or 8,700 jobs, are tourism-related.

The organizations will use the funds for promotion and advertising their programs, initiatives and events. Rockland has been positioning itself is as a destination where tourists can stop at multiple locations — such as traveling through the river towns — rather than visiting a single village or town and then leaving.

The Holocaust Museum & Center for Tolerance and Education (Promote Current Exhibits and Lectures) $ 3,500