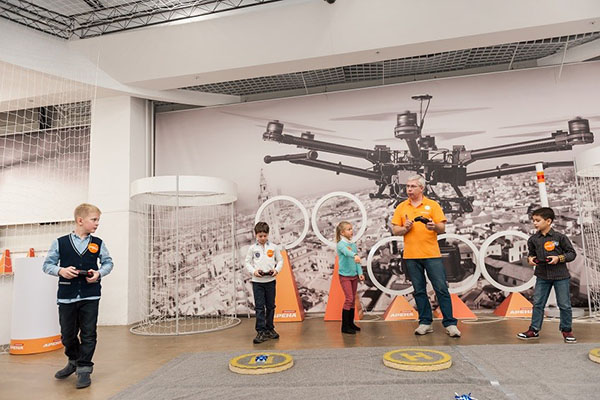 Think children’s museum meets game arcade meets corporate team building and a picture formulates. It’s hard to describe Arena STEM – the multi-faced education and entertainment center that is opening in the Palisades Center in June. Even its principals say so, given that the concept is fairly unique.

“This is something new,” said Sergei Manevich, one of the company’s co-founders. “We’re putting entertainment, education and retail under one roof, but the key thing is the experience. Arena STEM is designed for families to come and participate in activities, learning, take master classes, participate in 3D modeling. It’s all about having an experience with friends and families.”

Manevich and his partner Lenny Lozinsky say Arena STEM was founded on two principles. First, people, especially children, spend too much time on cell phones, computers, devices and watching television. Pair that with the hemorrhaging of malls by traditional retailers.

The partners, Russian emigres who opened their first Arena STEM in Moscow (but have since closed it) say the concept promotes hands-on interaction in science, technology, engineering and mathematics for “children 5 to 85 years old.” The entity has taken a 10-year lease on 12,240 square feet on the third floor close to the food court.

“Arena STEM is a new and innovative retail-entertainment concept focused on activities in technical science, sports, and creative hobbies,” said Darrin Houseman, General Manager of Palisades Center.  “It offers guests of all ages the ability to interact with the products being sold through real-life models, tracks, events, contests, and classes centered on technology, 3-D drawing, robotics, model making, and more.  It offers our guests another unique and immersive experience within the center to create, explore, and play.”

The Palisades Center, like malls nationwide, are seeking to diversify their tenant base as traditional retail brands and department stores falter or disappear. RCBJ recently reported Boda Borg, a realty gaming company, will take over the 25,358 square-foot bookstore on the fourth floor. The Barnes & Noble at the Palisades Center will likely downsize and relocate to another space to make room for a European gaming company.

American Dream in Rutherford, NJ, which is opening in phases, is the ultimate experience in experiential mall transformation, offering hockey rings, amusement parks, a ski slope and more.

Under one roof at Arena STEM, visitors will find a regatta pool, a submarine aquarium, drone helipad, archery, races tracks, off-roads and more. It’s as though the developers have taken many of the hottest video attractions and brought them to life via simulation and robotics. One is reminded of a time-travel movie where the audience steps into the screen and goes on an adventure. Only here, the fantasy is for real. Patrons will come to Arena STEM to experience flight simulators, racing, ATV courses, regattas. They’ll also take a drawing course or a master class in government.

The co-founders say the center is a response to the times we are living in.

“Kids don’t talk to each other,” said Lozinsky. “They’re forgotten how to interact with one another, and with others. When I grew up, I used to play chess with my grandfather. I doubt kids have relationships like this with grandparents today. What we’re trying to do is use technology to bring kids, parents, and grandparents together.”

Of course, kids always appreciate a token after an experience with parents and grandparents. Arena STEM will have a retail component, selling robotics, model boats, games, puzzles, die-cast models, assembly kits and train sets. Arena STEM estimates retail sales will represent nearly 50% of their projected $4.5 million in annual income by year five. From those who remember childhood in a pre-technology world, seems the retail assortment will test whether certain concepts are timeless.