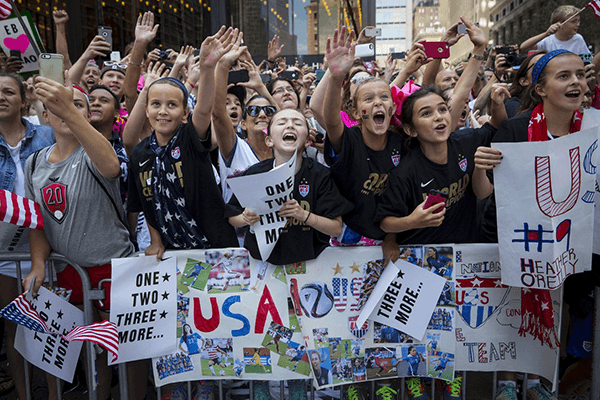 Governor Cuomo today signed into law legislation that expands equal pay laws to prohibit unequal pay on the basis of a protected class for all substantially similar work, and forbids employers from asking prospective employees about their salary history (S6549/A5308B).

The Governor signed the measures, a key component of his 2019 Women’s Justice Agenda, at the ticker-tape parade celebrating the world champion U.S. Women’s Soccer Team.

The governor has championed other measures this year to empower women including rape shield protections for victims of sex trafficking, enhancing workplace sexual harassment laws and funding a community college program that will help single moms move out of poverty.

“New York will continue to lead the way forward and stand in solidarity with women and girls in every corner of this state,” he said. “By signing this legislation, we are not only doing the right thing, we are also doing the moral thing and equal pay for equal work is now the law in the State of New York.”

The legislation signed today prohibits all employers, public and private, who do business in New York State, from asking prospective employees about their salary history and compensation, and expands the definition of “equal pay for equal work.”

These measures build on two executive orders signed by the Governor last year to eliminate the wage gap by prohibiting state entities from evaluating candidates based on wage history and requiring state contractors to disclose data on the gender, race and ethnicity of employees – leveraging taxpayer dollars to drive transparency and advance pay equity statewide.

In 2017, the Governor directed the Department of Labor to issue a report on the gender pay gap in New York and provide recommendations to break the cycle of unfair, unequal compensation. After holding pay equity hearings across the state, the Department of Labor released its report last spring. Acting immediately upon its recommendations, Governor Cuomo introduced a program bill to expand on his executive orders by instituting a salary history ban that prohibits all employers, public and private, who do business in New York from asking prospective employees about their salary history and compensation.

“Women should not be making 80 cents or less for every dollar a man is paid for the same work,” said Sen. David Carlucci (D-Westchester/Rockland), who co-sponsored the bill with Assemblyman Marcos Crespo’s legislation (S.6549/A.5308-B). “The first step in closing the gender pay gap is ending the salary history question so low salaries do not follow women throughout their career. Thank you to all the women who have stood up for equal pay and to the Governor for taking action to close the gender pay gap.”